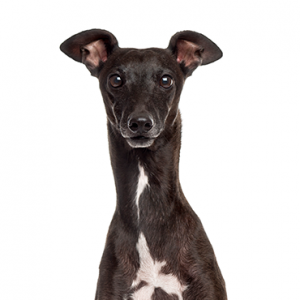 Many have likened the Italian greyhound to the African Jackal, it is not impossible that the species originated from Africa as a direct descendant of the Jackal. During the course of history, the smallest of the Sighthound family was used as a hunting dog, not necessarily because it has a great sense of smell but because it’s species sense of sight serves as a hunting guide. Discover more about our Italian Greyhound puppies for sale below!

As an ancient breed, it is not surprising that references of the greyhound has been found in Greek mythology. In the story of the goddess Artemis and Aktaeon, hunting dogs had mistaken Actaeon for prey and killed him. Although a sad ending, this reference is one of the proofs that this breed has been in existence since ancient times.

However, during the Middle Ages, the Italians started breeding the smaller sized greyhound which resulted in its widespread popularity across southern Europe. By the 16th century the breed received the name “Italian Greyhound” and by the 17th century became a popular companion among the royal families of Rome, Prussia, England, Denmark, and Russia.

By the 19th century, there were attempts to make the small greyhound even smaller, however, the cross-breeding with other toy species led to complications.

A club was then founded in 1900 to revive the Italian Greyhound to its original form but the World War (I and II) almost wiped the breed’s existence across Europe somehow before the wars it had found its way to America during the late 1800s, registered under the Toy breed Category of the American Kennel Club in 1886, the population of the Italian Greyhound was revived after World War II.

As at 2011 was ranked at 65 out of 173 breeds and was formally registered in 1951, clearly no longer used to hunt, the Italian greyhound is a companion dog whose popularity in other countries like Germany and Sweden only goes to show that extinction for this breed wouldn’t be coming anytime soon.

The Italian Greyhound has a loving personality. With family members, it can be very affectionate and gentle however it is mostly shy and reserved with strangers.

It is however advised to keep a training shirt and interesting. Also, their athletic agility would require you to have a dog door as they can never be fully trusted around the house.

Their energy level is high, they believe they can fly and tend to jump around a lot. Therefore, they might require long walks to tone it down. And if long walks aren’t feasible on a daily then 20 – 40 minutes exercise would do.

Grooming the Italian greyhound is very easy because of its smooth and short coat. However, the greyhound requires a regular wipe down with a damp cloth.

The unregulated breeders who are selling outside of the USDA regulations and without a license are what we consider to be “Puppy Mills.” We are committed to offering Italian Greyhound puppies who will grow up to become important members of your family. We only purchase puppies from the very best sources, and we stand behind every puppy we sell.

The best way to show your care is to give your dog your utmost attention. The Italian Greyhound loves companionship and can be very affectionate. You also need to ensure that you keep him/her healthy. One way is to provide warmth during one cold.

As much as these dogs are athletic and zesty, they are also compact. The most important thing is to ensure that the dog gets its daily exercise and that it has enough stretching room for sleep. The dog mostly doesn’t shed as much which is great for a small house or apartment.

Prolonging the life of your Italian greyhound means taking care of their health and one important part is spaying or neutering them. Veterinarians recommend that you do this when they are 6 months old.

The young pups, that is from 3-6 months are to be fed 3 meals within a 24-hour period. However, once the dog is 1 year old all that is required is 1 meal a day.

Italian Greyhounds are affectionate, intelligent and lively. They make the best partners because of their gentle and loving personalities.

Italian Greyhounds are most prone to dental diseases and so to promote their dental health, tooth brushing and chew toys are of the essence.

The lifespan of the Italian Greyhound is between 12-15 years. However, there have been records that support 18 years.

The greyhound typically weighs from 7-12 pounds. There are larger ones of about 18 pounds.

The Italian greyhound can grow from anywhere between 13-15 inches

As an inside dog, it is hard for the greyhound to live outside. It typically enjoys playing outdoors on warm days but thanks to its thin coat of requires warmth. It also cannot be left alone because it cannot take care of itself.

Fill out the below form and we'll get back to you as soon as possible. Thanks!