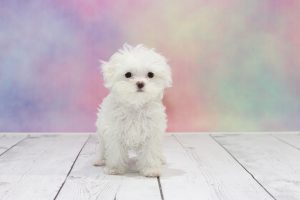 Greetings, ladies and gentlemen, and welcome to the next segment of our breed blogs! Please kindly don your crowns and jewels as we talk about the most aristocratic and richest breed of dog in all the land, the incomparable Maltese! Now, you may think that the Maltese is just a fluffy lap dog, which is actually mostly true, but they also have a long and fabled past. Read along with our blog to find out more about this curious little breed. Petland Novi always has Maltese puppies for sale in Michigan, just check out our available puppies page!

The Maltese is how old??

Even though the Maltese is a fairly well-known breed, people are often surprised at how long ago their origins can be traced. As one of the oldest breeds still in existence, The Maltese is said to date back over 2800 years and have graced the laps of Ancient Greeks, Romans and Egyptians. Even their very coats were especially bred and prized by Romans, as the color white was considered sacred. Ancient Egyptians built elaborate tombs for them. And in Greece, they were often painted on ceramics and in murals to depict their popularity. That’s a lot of love!

Royalty comes with its perks!

The Maltese were the favored dogs of queens and royalty alike, such as Marie Antoinette, Mary Queen of Scots, Queen Elizabeth and Queen Victoria. They were often fed out of golden dishes and wore real diamond collars! That popularity among the rich and famous has continued into modern times as well. The richest (yes, richest) Maltese in history, named “Trouble”, was bequeathed nearly $12 million by her owner, real estate magnate, Leona Helmsley in 2007! I would definitely call that a perk!

“And though they be but little, they are fierce!”

You may think that because of their diminutive size, the Maltese is not athletic, but you would be incorrect! The Maltese is an excellent jumper and has little fear of gravity, making it prone to grabbing things high up and getting on couches and beds. They are also described as being loving and gentle, as well as fearless and loyal to their owners. Although, this makes them a little wary of strangers, so introducing new people can be a slow process.

Maltese are technically non-shedding or hypoallergenic, which is sometimes confusing to people. They don’t have fur like other dogs, they have hair, which can still fall out, but is more like humans losing hair throughout the day. Because of that hair, they don’t carry dander like other dogs, which is what people tend to be allergic to when it comes to man’s best friend. However, on the flip side, their hair grows continuously and requires daily brushing to prevent mats and monthly haircuts to keep their hair short.

Well, we hope this breed blog was as interesting to you as is was to us!